In the economic field, both China and African countries belong to the developing world and face the common task of developing the economy and improving peoples livelihood. Our economies are highly complementary to each other. In the new situation, the mutually beneficial Africa-China economic and trade cooperation is showing good momentum. Gratifying results have been achieved in the further expanded and more diversified cooperation.

China has emerged as Africa’s largest trading partner, due to an established relationship and economic contributions. On a larger scale, some think China’s main aim for investing in Africa is for exploitation or taking over Africa’s business. Every proposition has so far benefitted both parties, the drivers of this investment are responsible for its steady movement. The major reasons for China’s investment are:

1.  Supply of raw materials. The main concern of China is mining and oil. Mining investment in 2019 accounted for nearly 1/3 of Foreign Direct Investment (FDI). China requires a solid base of raw materials to fuel its rapidly growing economy. Africa is richly blessed with natural resources, limiting factors are not allowing them to be efficiently used. With Africa having a steady export, the economy is ready for a turn.

2.  Political and diplomatic influence. China has the acquired resources to develop and grow Africa. With that, it will be well known for it effective investment and build a relationship with other African countries. With international organization meetings, African countries can become good allies of China because of its contribution to the economy. If this project turns out more of success than failure, China might rank more than the U.S. Already there is a toosle for power.

3.    Growth opportunities in emerging markets economies. As stated earlier Africa is endowed with raw materials. This is the reason for Nigeria’s market boost, as Nigeria is well known as the home of domestic goods. China already established companies in Africa, in the figure below, taking a great opportunity of the market economies. 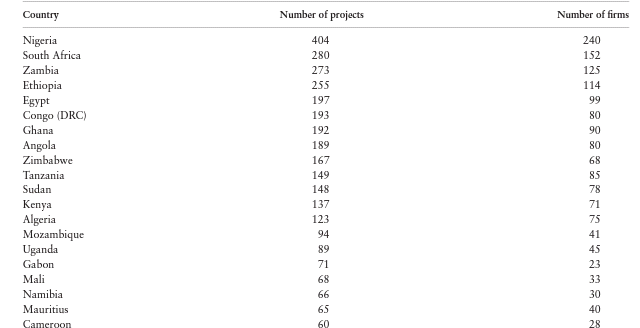 By 2050, Africa’s 1.1 billion person population is slated to double, with 80% of this growth happening in cities, bringing the continent’s urban headcount up to more than 1.3 billion.

With this breakneck pace of urbanization comes many unprecedented economic opportunities. The International Monetary Fund (IMF) recently declared Africa the world’s second-fastest-growing region. Many are predicting that Africa is well on its way to becoming a $5 trillion economy, as household consumption is expected to increase at a 3.8% yearly clip to $2.1 trillion by 2025. The attention of the world is now drifting towards Africa, with comparisons to the 1990s-era.

The central players in many of Africa’s biggest ticket infrastructure projects — including the $12 billion Coastal Railway in Nigeria, the $4.5 billion Addis Ababa–Djibouti Railway, and the $11 billion mega port and economic zone at Bagamoyo — are being developed through Chinese partnerships. Other aspects were not left out, Security development and economic advancement have all changed Africa for good.

To start fighting for its course, Africa will have to be united and take up the project themselves. AfCFTA should be handled by Africans without any interference. This relationship has thus far been benefited by both parties. A new beginning requires sacrifice. Some African countries are on the verge of being developed and we can leverage on them. We all need an independent Africa.

China is after the development of Africa for its own benefit and for Africa’s as well, in the long run.

Every aspect of Africa – security, economic, political, infrastructure – have all been advanced by certain Chinese project. We are set for a better continent in the near future with this development.

Do you think Africa is ready?

What do you think?

Orire Agbaje, studies Economics at the University of Ibadan, Nigeria. She love crunching digits. She is very cheerful, assertive and hard-working.

This site uses Akismet to reduce spam. Learn how your comment data is processed.